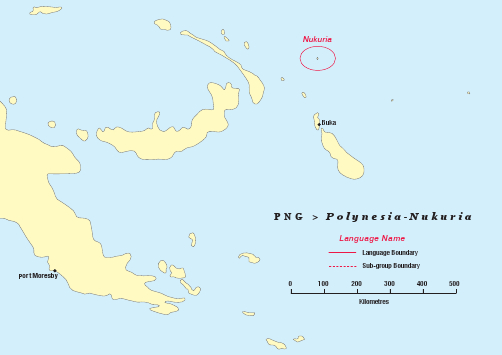 Nukuria (pop. 500) is a Polynesian language in Papua New Guinea. The language is closely related to the language of Takuu, but also has many links to Kapingamarangi in the Federated States of Micronesia. There are no dictionaries or grammars published in the Nukuria language.

Bible Translation in the Nukuria language

In August 2010 Isles of the Sea coordinator Nico Daams and Takuu translator Tom Puaria met with a group of Nukuria men and women to discuss the translation of the Bible into their language. Tom explained the process and what is involved. We made it clear that the responsibility for this project will be theirs, but that we will offer our services as advisors free of charge. Because the language is closely related to the Takuu language, Tom will be their translation advisor, and help the project along with the expertise he has gained as one of the two translators of the Takuu New Testament. Nico will be mentoring Tom and assisting the Nukuria project. Currently the Nukuria community is in the process of setting up a translation committee and beginning a fund raising drive to support their translation project.

Tom Puaria is advisor to the Nukuria translation committee. But as "outsiders" on Nukuria island, he and his wife Sharon are involved in much more than translation. In 2018, they were asked to step in when a conflict between two groups on the island got seriously out of hand. Prayer and counseling were vital to bring about reconciliation.

A Bible translation program may involve much more than just translating the Bible text. Who makes sure that people can actually read their language well, so that they can read the translation without difficulty? And will the translation actually be used in the churches? The Nukeria translation team is involved in both of these things: literacy and Scripture Engagement.

The coming of the Gospel to Nuguria

Only a couple of generations ago, the Gospel was unknown on the island of Nuguria, and village authorities resisted efforts to evangelise the island. This changed in the late 1970s.

The dedication of the four Gospels on Nukuria was celebrated in two villages with much joy and extended festivities. As it was the youth who brought Christianity to the island in the 1980s, the youth of the island spearheaded the celebrations.

On Saturday 8 September, David Paukie (60), chief of Fead Island (= Nukeria atoll) and one of the main translators of the Nukeria NT, passed away in the Buka Hospital. He lived to see and experience the joy when the Nukeria Gospels were published a short while ago.

The four Gospels in the Nukeria language

This month the Nukeria people received the first book ever to be published in their language: the translation of the four Gospels. It was received with great excitement and interest.

The first translation course ever held on Nukuria

When the Nukurua translators were not able to attend the second part of their training in Buka, advisor Tom Puaria decided to organise the course on the island itself.