Dedication of the Nukumanu New Testament is going ahead

(February 4) Today the festive dedication of the Nukumanu New Testament is taking place. When this message is posted, it may have taken place already – news is scarce from remote Nukumanu island, a.k.a. Tasman Island.
The history of the Nukumanu translation has been told on this site: translator Edmond Teppuri has worked for years to make this translation a reality. Last year he and his family faced a very difficult time, when several family members passed away unexpectedly. They moved to the provincial capital Buka, where Edmond finished the translation, aided by consultant Nico Daams. Subsequently, the translation was typeset in the Netherlands, printed in Sri Lanka, and shipped to Papua New Guinea.
Organising the dedication was not easy. Shipping to the island is irregular, to say the least. In the end it looked like a government ship was available to take the books and the guests to the island for the festivities. (The distance from Buka to the island is a bit over 500 km.)
Last week several guests arrived in Buka, waiting for the ship to leave. However, on Friday it turned out that the ship would not travel before February 10. They were then able to charter a small open boat to make the trip, with a stopover on Mortlock/Takuu Island, which lies halfway. The boat could only take three passengers (as it had to take a few drums of extra fuel), so other guests stayed behind on Buka.
We had news that the boat arrived safely on Nukumanu Island, and the dedication was going ahead today. This means that the Nukumanu community now has the Word of God available in their own language. 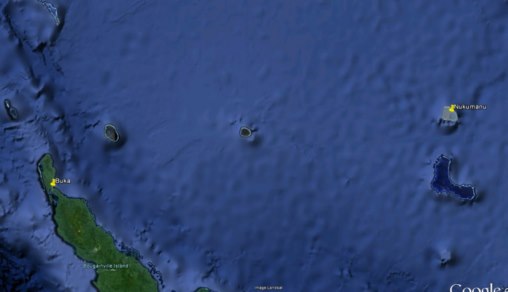 Read more about this project: Nukumanu