Niuafo’ou: next step in translation project

The Niuafo’ou team has been working for a number of years to translate Bible books into the Niuafo’ou language. By early 2011, the Gospels and Acts had been translated. The question was now: what is the next step, and how should it be taken?
In July, the translation team had a number of meetings, together with Tevita Lālahi (Bible Translation Organization Tonga) and with Paulus & Antje Kieviet (Isles of the Sea).
The first thing to take care of was the translation software, Paratext. The translators had used this program in the past, but with computers being replaced (crashed, lost…), most had no longer access to it. Where needed, Paratext was re-installed, and the team devoted a few sessions to Paratext training. The project was also set up in such a way that each translator can send his/her translated texts to an online server, where the others can download it and integrate it into their own copy of the translation. This is a new function of Paratext, which makes the job of working together in a project and keeping track of different people’s work much easier. It also ensures that, even when computers crash or are lost, there is still an online backup of the files.
The translators divided the remaining New Testament books among themselves to translate. The translated books will also be peer-reviewed, so that each book has been gone through at least two pairs of hands. The team also discussed some important issues like: should one Tongan translation be used as source text, or would a more eclectic approach be better? And: how closely should the Tongan text be followed? To what extent, for example, can key terms be translated differently from the Tongan Bible?
The team was encouraged by these meetings and feels a renewed enthusiasm to continue the translation work. 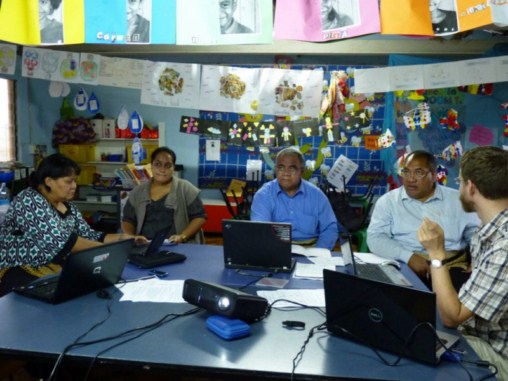 The Niuafo’ou team at work.

Read more about this project: Niuafo'ou