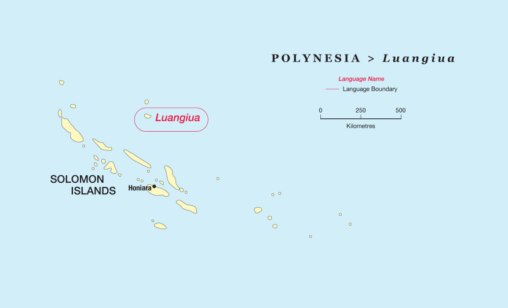 Lord Howe (pop. 2370) is a Polynesian language in the Solomon Islands. The language is closely related to Nukumanu in Papua New Guinea; there is frequent contact and people can understand each other easily. The language is also closely related to the Takuu and Nukuria languages, both in Papua New Guinea, and to Sikaiana in the Solomons.
Lord Howe is one of the largest atolls on earth, yet has only 12 km² of habitable land spread out over more than 120 small islands. Most of the inhabitants live on the two main islands of Luaniua in the southeast of the atoll and Pelau in the northeast. With so little land to support a growing population, a large number of people from the atoll have settled in the Lord Howe settlement in Honiara on the banks of the Mataniko River. The Lord Howe people mostly live off the land and the sea, but in recent years have switched to a money economy based on exporting sea cucumbers and trochus shells. Weather and sea conditions, however, determine the success of this enterprise. Due to over-harvesting these enterprises are sometimes shut down by the government to allow stocks to return to sustainable levels.

Bible Translation into the Lord Howe language
In 1978 Nico and Pam Daams were assigned by the SICA Translation Committee to assist the Polynesian language groups in the Solomon Islands with Bible translation, beginning with the people of Rennell and Bellona. In 1984 they relocated from Rennell to Honiara in order to also assist the Tikopian language group. In 1986 A Lord Howe man, Ezekiel Kikiolo, approached Nico if he could help him with the translation of the Bible into his language. He attended a translation workshop in Honiara the same year, and completed the Gospel of John soon after. In 1988 Ezekiel accompanied Nico to the SIL international conference in Fort Worth, Texas, and during that visit Ezekiel met David and Pam Gentry, friends of the Daams, who subsequently joined SIL and came to the Solomons in early 1990 to assist the Lord Howe translation project, when the Daams left for a home assignment in the Netherlands. The initial driver of the project, Ezekiel Kikiolo, had passed away in April 1989, and the Gentrys started with a new translation team. The New Testament was completed in 1998 and has been in good use by the churches on the island.

On 9 April, Edmond Teppuri met with ten chiefs of the Lord Howe language group. They were excited about the prospect of translating the Old Testament into their own language, and doing this as a project they own themselves.

Recently Isles team member Edmond Teppuri travelled to Lord Howe atoll (Solomon Islands). His visit sparked keen interest to start translating the Old Testament and to revise the New Testament, and may mean the start of a translation program that is truly community-owned.