(September 2018) The dedication service of the Revised Gospels in the language of Rennell-Bellona was held in Honiara on Sunday September 23rd. More than 100 Rennellese and Bellonese attended the festive service, including church leaders representing the three different denominations present on the two islands. The service was organised by Mosese Loma of the SDA church of White River; speakers included the head of the Solomon Islands national Bible translation organisation (BTLP) Pastor Andrew Fanasia, the SDA pastor Bruce Likaveke and Nico Daams, the translation consultant for this project. Unfortunately, Ribeka Tago, who had done most of the work on this revision, was not able to attend because she had a bad case of the flu.

Singing groups from the SSEC and the SDA churches brought special musical items. The highlight was the moment when representatives of all the denominations on the two islands, along with representatives from various translation organisations in the Solomon Islands, knelt for a prayer of dedication. Pastor Pollen prayed that the Gospels would touch the hearts of people from the two islands.

Several speakers mentioned their joy at having the different denominations worship together and how it was God’s Word that had brought us together. At the end of the service all available copies of the Gospels were sold, while the remaining copies will be distributed later this year on Rennell and Bellona.
Nico challenged those present to use the Gospels widely and to collect any comments they may have about the translation decisions that have been made in this revision. He also suggested that some people might help review about 40% of the Old Testament, which is already in first draft. That work was done by Ribeka Tago and her late husband, David, but needs to be reviewed before it can be published. 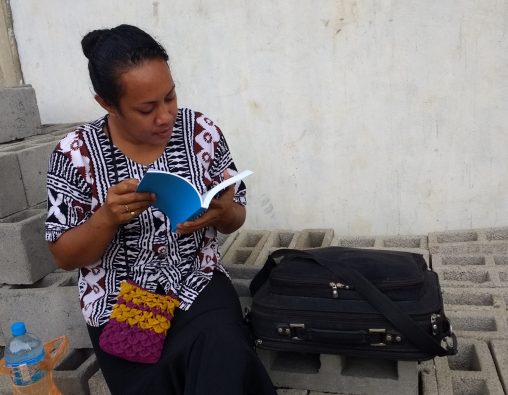 Read more about this project: Rennell-Bellona