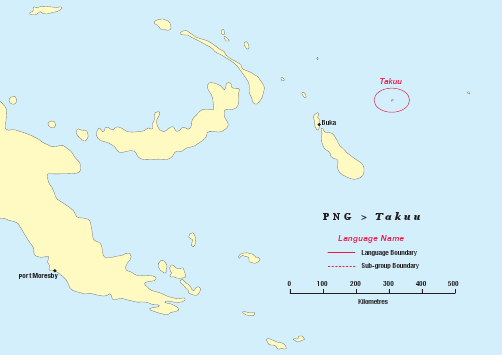 Of the three Polynesian atolls in Papua New Guinea, Takuu (more commonly known as Mortlock) has the highest number of language speakers (1750), but in terms of land and lagoon area it is the smallest atoll of the three. The total land area occupied by about 400 residents is less than 1 sq km. The majority of the people have moved off island, with many of them occupying good positions all over PNG.
Christianity came to Mortlock in the early 1980s, when a number of individuals became Christians while living away from the atoll; when they returned to their home island, they became the core of fellowship groups, which rapidly attracted a large number of young people, especially young women. Almost from the outset, there was a great deal of objection toward holding Christian services, and a concentrated effort was made to put a stop to Christian worship altogether. The believers suffered much persecution; the conflict came to a head in 1986, and was temporarily resolved when government officials from the province intervened. As a result, two small fellowship buildings were constructed in the village: one for the group affiliated with the United Church and one for those affiliated with the SDA church. More recently a third denomination has sprung up on the island. A resistant group of people on the island continues to hold onto their traditional, pagan beliefs and practices.

Bible Translation in the Takuu language

When Sue Andersen and her then husband Gail Pressnall arrived at Mortlock in November 1986 representing SIL, the chiefs gave them permission to translate the Scriptures into their language. They said, “We would like to know what ‘your’ God has to say, but we don’t trust any man to come and tell us. They might lie! You put the Scriptures into our language and we will read it for ourselves and then make up our own minds.”
Sue has mentored the translation team for many years through Translators Training Courses, training the translators in Bible background, exegesis and principles of translation. The two main translators of the Takuu New Testament, the Rev. Abraham Vaelani and Tom Puaria, have completed the translation of the New Testament, and it was dedicated on Mortlock in December 2010. Tom Puaria’s wife Sharon started translating Genesis soon afterwards, and in November 2011 she completed the first of a series of training courses for beginning Bible translators. Her husband Tom is assisting her as translation advisor, with Paulus Kieviet serving as translation consultant.

How the Gospel came to Mortlock

Until just four decades ago, the people of Mortlock atoll (Takuu) rejected the Gospel. No one was allowed to preach it. This changed in 1980, but not without a fight. Tom Puaria tells how the Gospel came to his home island.

What do you do if the churches remain empty, even if the Bible is available in the own language? Bible translator & advisor Tom Puaria engaged with church leaders on his home island to promote prayer, church attendance and engagement with the Scriptures. During a retreat, many people renewed their commitment with God.